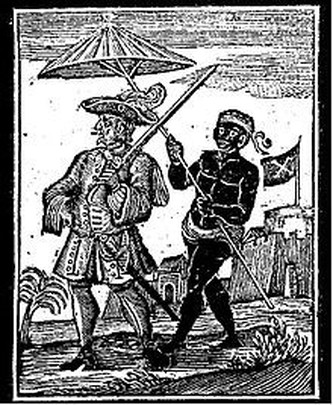 “None of these bold Adventurers were ever so much talked of, for a while, as Avery; he made as great a Noise in the World as Meriveis does now, and was looked upon to be a Person of as great Consequence; he was represented in Europe, as one that had raised himself to the Dignity of a King, and was likely to be the Founder of a new Monarchy;”

- A General History of the Robberies and Murders of the most notorious Pyrates (1724). 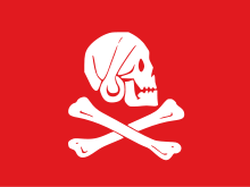 A common depiction of Every’s Jolly Roger. No reliable accounts of the flag’s design exist, however one design that was attributed to him was the skull in profile wearing a bandana and earrings (which were generally not associated with pirates until much later). The design is over a red background, a popular color for pirate flags during Every’s time.

At the dawn of the Golden Age of Piracy, while infamous figures like Blackbeard and Calico Jack were still mere children, there was one pirate that reigned above all others in terms of notoriety and success. That man was Captain Henry Every. Every was known by many names. His last name was occasionally spelled Evory or Avery, he is sometimes named as John Avery, he was known by his crew and other pirates as Long Ben, and he was given the nicknames “The Arch Pirate” and “The King of Pirates,” a testament to his accomplishments at sea. His career lasted only about 2 years, but in that short time he managed to make himself incredibly rich, pulled off the most profitable single maritime raid in history, and unlike most pirate captains, retired without being arrested or killed.

Every was born in England on August 23, 1659. Almost nothing is known about his life until 1689, when he served in the British Royal Navy, fighting the French in the Nine Years’ War. A year later he was discharged and participated in slave trading along the west coast of Africa for a few years until he once again began attacking French ships as the first mate aboard Charles II, a warship commissioned by the Spanish monarch and ally of England, Charles II, who the ship was named after. The ship was supposed to conduct its operations in the West Indies, but due to the Spanish government failing to deliver the ships letter of marque (essentially a license to privateer) and the ships owners not paying the crew’s wages, the crew mutinied. Every was elected the new captain and Charles II was renamed the Fancy. Every and his new pirate crew set sail for the Indian Ocean.

The Fancy and her crew plundered five ships off the coast of West Africa before Every and his crew made it to the Arabian Sea, where Every would pull off his most successful heist, and what would be known as the single greatest pirate heist in history. A convoy of 25 ships belonging to the Mughal Empire was making the annual pilgrimage to Mecca. Among them was the flagship Ganj-i-sawai, a ship containing a vast hoard of treasure. Every joined forces with multiple other pirates, including notable pirate Thomas Tew, and was given command of the squadron. During the attack, many smaller ships fell behind, and Tew was killed while engaged in combat with a Mughal ship. Every however managed to capture the Fateh Muhammed, the Mughal flagship’s escort, and after an hours-long hand-to-hand combat on her deck, captured the Ganj-i-sawai herself, and her treasure. The treasure hoard consisted of over £600,000 in gold, silver, and jewels, which is equivalent to more than 78 million US dollars in 2010, making him the richest pirate in the world at the time. Consistent for his reputation for cruelty, after the raid Every and his crew reportedly tortured and killed many of the ships’ passengers, and raped many of the women as well, according to contemporary sources. Also reported is that some of the women committed suicide to avoid this.

The raid soured the already tense relationship between England and the Mughals, and in retaliation, the Privy Council and the East India Company placed a bounty on Every’s head worth £1,000, a very large sum for the time. This led to the first worldwide manhunt in recorded history, but for many years, Every eluded authorities. Every and his crew sailed to New Providence in the Bahamas for a brief time before taking false names and splitting apart. 24 of Every’s crew members were captured from different parts of the world, including Great Britain, the West Indies, and the American Colonies, but Every himself was never found, and vanished from all records after 1696. It is unknown exactly what happened to him, although there are a few stories. The popular tale at the time was that Every had sailed to Madagascar with his fortune and ruled over his own Pirate Kingdom, but this story originally comes from a dubious memoir written around 1709. In his book A General History of the Pyrates, Charles Johnson writes that Every died penniless and alone on the streets of Bristol after being swindled out of his fortune by some merchants, but some doubt this idea and believe that it was a story crafted by Johnson in order to  add the element of Karma for Every’s horrible deeds. A third reported outcome is that Every changed his name and died peacefully somewhere in England or the west Indies, however, like all other accounts of Every’s life after piracy, this too is unreliable. Regardless of what eventually became of Henry Avery, stories of his deeds were told by many over the years, and a number of the greatest pirates of the Golden Age were directly inspired by tales of the legendary King of Pirates.