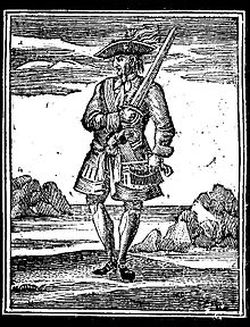 Jack Rackham was known by his nickname “Calico Jack” due to the brightly colored Calico clothing he wore. Calico Jack, though having had a short career of only 2 years as captain, marks his place in pirate lore for his flag: a skull and crossed swords set in a black background, which has become known as the pirate flag. He is also known for having two female crew members, Anne Bonny and Mary Read, who became famous for being just as ruthless, violent, and crass as the rest of the male crewmembers.


Calico Jack had been serving as Quartermaster under another pirate by the name of Charles Vane until 1718. Vane chose to retreat from a fight with a French Man-of-war battleship, rather than fight it head on. Jack, along with several other crewmembers, wanted to fight the battleship, knowing that it was full of riches for the taking. Disappointed by Vane’s decision to flee, Jack marooned Vane along with 15 other pirates who supported the decision to retreat, and assumed command as captain.

“But the next Day, the Captain’s Behaviour was obliged to stand the Test of a Vote, and a Resolution passed against his Honour and Dignity, branding him with the Name of Coward, deposing him from the Command, and turning him out of the Company, with Marks of Infamy; and, with him, went all those who did not Vote for boarding the French Man of War,”  - Captain Charles Johnson, A General History Of The Pyrates

In December of 1718, Calico Jack and his crew captured a rich merchant ship, the Kingston. The takeover occurred within sight of Port Royal, where angry merchants on shore witnessed the attack. Many decided to go after Jack, and in February of 1719, bounty hunters caught up with Jack and his crew. While most of the crew escaped to safety, they lost the Kingston. Calico Jack later approached Governor Woodes Rogers and asked to be pardoned for his crimes of piracy, claiming that former Captain Charles Vane had forced them to be pirates. Rogers, who despised Jack’s former captain, accepted the story and pardoned Jack.

In his down time, Jack met Anne Bonny and Mary Read. Having grown bored of civilian life, Jack, along with Bonny, Read, and a new crew, returned to a life of piracy in August of 1720. The crew attacked fishermen and merchants, quickly earning a reputation for ruthlessness, and plundering the equivalent of $1.5 million U.S. dollars. 3 months after returning to piracy, Jack and his crew were discovered off the coast of Jamaica by Captain Jonathan Barnet, who had been pursuing them. Their reign of terror had ended, and Calico Jack was later tried and hanged at a harbor still known as “Rackham’s Cay.”

Though his career was short, Calico Jack remains a famous pirate due to his ruthlessness, and his flag. The crossed swords, skull, and black background has become a universal and easily recognizable symbol of piracy.