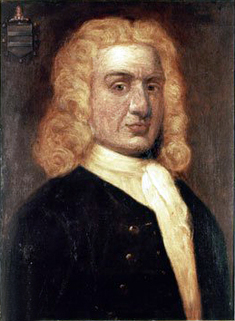 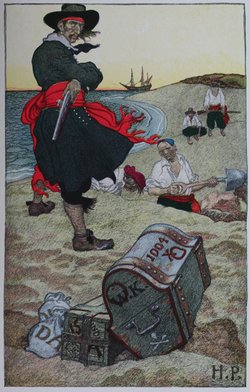 This painting by Howard Pyle shows William Kidd burying his treasure on a beach
He did all of his work in the Early Golden Age. He was born in Scotland in 1654.  By the 1680s, after working with an assortment of buccaneer crews, he was a respected privateer.  After working for a while Kidd moved to America to New York and married a rich widow.  He later returned to England when tensions between England and France turned into a full fledged war.  He was commissioned to privateer the Blessed William to protect English ships in the Caribbean from French attacks.

In 1695 he returned to England where he befriended Lord Bellomont.  He was hired by Bellomont to attack French ships and pirate vessels in the West Indies.  He had bad luck at first, with some of his men dying of illness and finding few ships, so he stopped in Madagascar in 1697.  He had some small luck in attacking various Indian ships.  His luck changed in 1698 when the Quedagh Merchant rounded the tip of India.

This was a 500 ton Armenian ship carrying gold, silk, spices, and other riches.  When news of Kidds attack on the ship returned to the minister of the court of the Indian Grand Moghul who owned part of the riches on this ship, he was quickly cast as a wanted criminal.  After capturing the ship he set sail on it for the Caribbean and eventually made his way to a smaller ship in Boston, where he was arrested and shipped back to England.

In 1701 Kidd was put to trial.  He expected people such as Lord Bellomont to defend him, however, they only dirtied his name more.  He was found guilty and hung in a cage and left to rot to serve as a warning against other pirates.  Right before he was put to death Kidd allegedly buried some of his loot in the Caribbean and despite generations of treasure hunters nothing has ever been found.  This has left us with a story that inspired the fascination we have today with pirates.

"Then putting to sea again, he took the greatest prize, which fell into his hands, which he followed this trade; this was a Moorish ship of 400 tons richly loaden, named the Queda Merchant."