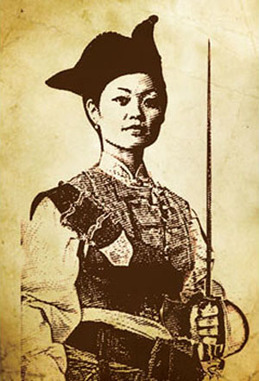 Did her work the same area as Cheung Po Tsi.  As mentioned before was married to him.  She started her career as a prostitute and married Cheng Yat who commanded a pirate fleet and adopted Cheung as a son.  By the time Cheng died he had a coalition of 400 ships and over 70,000 sailors.

After Cheng died Ching took over and fell into an affair with her adopted son, Cheung.  She then married him after making him her lieutenant.  She developed a very strict code of laws.  Commands weren’t to be given by anyone except the leaders of the fleet.  This was considered a capital offense along with disobedience. If a village regularly helped the pirates, it was a capital offense to steal from them.  It was also a capital offense to steal from the treasury and to rape female captives.  Even if there was consent from the captive the sailor was beheaded and the female thrown overboard with weights tied to her legs.  If a sailor deserted and was caught, one of his ears was cut off and he was shown off as an example.

Her fleet committed varying kinds of piracy varying from weak merchant ships to sacking and pillaging villages inland along ﻿rivers.  The government tried to destroy the pirates in 1808 however all they managed to do was give the pirates even more ships for the fleet.  The damage was so great that the government had to utilize private fishing vessels.  A rival pirate fleet called O-po-tae forced Shih’s fleet to retreat.  O-po-tae sought a pardon for his men from the government and it was granted.  She asked for pardon along with Cheung Po and was granted it and worked the rest of her life running a brothel and gambling house in Guangzhou.