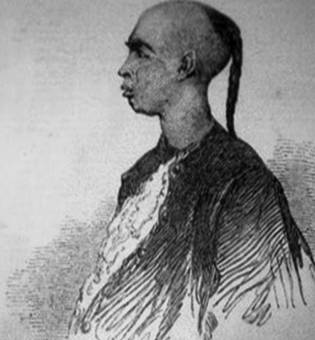 Known mostly because of a legend about his hidden treasure in the Cheung Po Tsai Cave in Cheung Chu Island.  19th century pirate who’s name literally means Cheung Po the Kid.  Grew up as a poor fisherman’s son in Southern China in Xinhui of Jiangmen.  He was kidnapped at the age of 15 by a pirate of the name Cheng Yat.  Cheng Po Tsai quickly became Cheng Yat’s favorite subordinate.

He quickly rose through the ranks and was adopted by his captain and his wife Ching Shih.  Cheng Yat died in a storm and his wife, now known as “Widow Ching” maneuvered her way into his leadership position and Cheung became her right-hand man.  They had a love affair and soon married and Cheung completely took over the pirating business from her.  He did most of his business in the Guangdong coastal area during the Qing Dynasty.  His pirates were well disciplined, shared equally, and weren’t allowed to harm women.  At the height of his power he had 20,000 men and several hundred ships.

In 1810, after a downfall of his pirate army, Cheung surrendered to the Qing government and became a captain in the Qing imperial navy responsible for eradicating piracy.  He lived the rest of his live enjoying comfortable administrative positions.   There were a lot of rumors about Cheung’s treasurers. The most famous one is about a small cave in dumbbell - shaped Cheung Chau Island. The cave is named after him and is small and difficult to crawl into, however many tourists visit this island attraction every year. Many of them are modern treasure trying to discover lost pirate treasure.