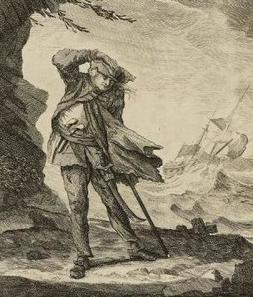 Edward Low was active in the latter days of Golden age.  He generally maintained a small fleet of about 3 or 4 ships, however he captured over 100 ships in his three year career.  Notorious as one of the cruelest pirates of his time, he would violently torture his victims before killing them.  For example he would cut off people’s lips, boil them, and then make them eat them.  Low had been a thief since a young age.  He had a wife and two children, his son died as an infant and his wife died giving birth to his daughter Elizabeth.  He worked at first as a rigger in 1722.  One day when he was hungry the captain told him he would have to wait and just drink some rum.  In anger he shot his musket at the captain and missed shooting another man through the throat.  After this failed mutiny Low and his friends had to leave the ship and later took over a small sloop off the coast of Rhode Island.

﻿﻿﻿"It happed that the Boat one Day came aboard just before Dinner was ready, and Low desired that they might stay and Dine; but the Captain, being in a Hurry for his Lading, ordered them a Bottle of Rum, and to take t'other Trip, because no Time should be lost : This provoked the Boat's Crew, but particularly Low, who takes up a loaded Musquet and fires at the Captain, but missing him, shot another poor Fellow thro' the Head, then put off the Boat, and with his twelve Companions goes to Sea : The next Day they took a small Vessel, and go in her, make a black Flag, and declare War against all the World.” 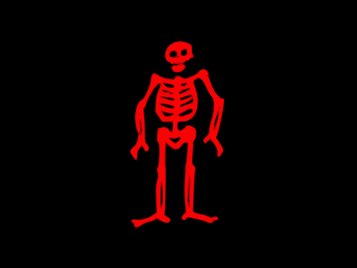 The second and most commonly known Jolly Roger of Edward Low. His first flag was a very similar design to Blackbeard's flag. "Edward Low Flag" by Orem is licensed under CC BY-SA 3.0.
- A General History of the Robberies and Murders of the most notorious Pyrates (1724)

Low was originally a Lieutenant under George Lowther until they captured a 6-gun brigantine named Rebecca and Lowther gave it to Low.  As captain Low went around and gained notoriety as a pirate in the Caribbean and eventually getting a bounty on his head.  Low, after capturing a French Pink that he renamed Rose Pink, he ordered men to clean the size of the boat.  Being inexperienced he had too many men go on the side and it capsized.  After some time his crimes caught up with him.  A heavily armored Man of War that was sent to find Low named Greyhound attacked Low outside of the Carolinas and forced him to retreat with a small crew and minimal money.  In anger he captured several ships and tortured the people on board.  It got to the point where his crew refused his orders to torture people because they were too extreme.  Lowther rejoined Low after his capture of the Merry Christmas, however, two days later, abandoned him with thatBy as his only ship left. It is unknown what happened to Low after this.  He disappeared from the sea.  There are rumors saying his ship was last seen in the Canaries and Guinea, and rumor says that he was sailing Brazil, and others say his ship sank in a storm and his lost all his men.  He is said to have died in 1724.