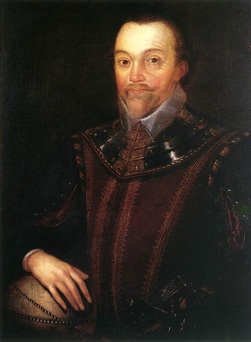 Sir Francis Drake was a famous English admiral who circumnavigated the globe in 1577-1580, helped defeat the Spanish Armada and was the most renowned seaman of the Elizabethan era. He was born around 1540 - 1544 in Devonshire, England, participated in some of the earliest English slaving voyages to Africa and earned a reputation for his privateering, or piracy, against Spanish ships and possessions. By the 1560s, Francis Drake was given command of his own ship, the Judith.

In 1570 and 1571, Drake made two profitable trading voyages to the West Indies. In 1572, he commanded two vessels in a marauding expedition against Spanish ports in the Caribbean. He saw the Pacific Ocean and captured the port of Nombre de Dios on the Isthmus of Panama. He returned to England with a cargo of Spanish treasure and a reputation as a brilliant privateer.

After leading two successful expeditions to the West Indies, Drake came to the attention of Queen Elizabeth I, who granted him a privateer’s commission, effectively giving him the right to plunder Spanish ports in the Caribbean.

"There must be a beginning of any great matter, but the continuing unto the end until it be thoroughly finished yields the true glory."  - Francis Drake.

In 1577, Drake was secretly commissioned by Elizabeth I to set off on an expedition against the Spanish colonies on the American Pacific coast. He sailed with five ships, but by the time he reached the Pacific Ocean in October 1578 only one was left, Drake's flagship the Pelican, renamed the Golden Hind. To reach the Pacific, Drake became the first Englishman to navigate the Straits of Magellan.

He arrived back in England, landing at Plymouth in September 1580 with a rich cargo of spices and Spanish treasure. Drake had become the first Englishman to circumnavigate the world. The treasure he captured made him a wealthy man, and the Queen knighted him in 1581. Later that year, he was elected to the House of Commons. In 1588, Sir Francis Drake was appointed vice admiral of the English Navy, under Lord Charles Howard.