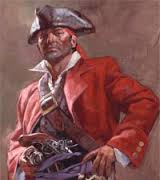 Samuel Bellamy was an English pirate with a career of only one year, lasting from 1716 - 1717. However, Bellamy captured 53 ships in that time, and quickly became the #1 richest pirate according to Forbes Magazine, having amassed a fortune equal to $131.4 million U.S. dollars. Bellamy was known by his nickname, “Black Sam,” for the way he tied his long black hair back, in a manner that seemed to mock the white powdered wig that had become so fashionable at the time.

Bellamy began as an unsuccessful treasure hunter who turned to piracy under Captain Benjamin Hornigold and his First Mate Edward Teach, a.k.a. “Blackbeard.” In the summer of 1716, Hornigold’s crew grew tired of his unwillingness to attack British ships, and overthrew him as Captain of the Marianne, replacing him with Samuel Bellamy. Bellamy quickly captured a new ship, the Sultana Galley, and made this his new flagship. In the spring of 1717, Black Sam and his crew performed their greatest capture, the Wydah Galley, an English merchant ship that was loaded with riches from just having sold 500 slaves. After capturing the Wydah Galley, Bellamy offered the Captain his own ship, the Sultana, in a trade that further supported Bellamy’s reputation for honor and generosity.

Two months after aquiring the Wydah Galley, Bellamy and his crew became caught in a storm off the coast of Cape Cod, where the ship’s mast snapped, and the ship quickly capsized and sank. All but two of the 145 men were killed, with Bellamy among the dead.

In 1984, the wreckage of the Wydah Galley was discovered, making it the first authenticated pirate shipwreck discovered in North America. Black Sam’s legacy, aside from having been the richest pirate, was one of generosity and mercy towards those that he captured on pirate raids. This reputation earned him another nickname, “The Prince of Pirates,” and his crew likened themselves to Robin Hood, calling themselves “Robin Hood’s Men.” Though he had a short career of one year, dying at the age of 29, Samuel Bellamy makes his mark as one of the most notable pirates in history.