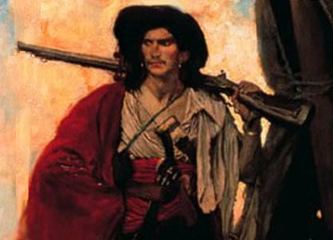 Peter Easton was a loyal English seaman who later turned pirate. He had a well-equipped fleet of warlike ships and his intensive raids on both English and foreign ships earned him the title of “arch-pirate”.

In the early 1600's Peter Easton, also known as the Pirate Admiral, amassed a small fortune off the coast of Newfoundland while working as a pirate. Easton and his crew of almost 5,000 wreaked havoc up and down the coast of the North American Eastern Seaboard. Easton became a legend and no body of law was  able to stop his reign of piracy. Captain Peter Easton was commissioned by the Queen of England in 1602, to take three British Warships to Newfoundland to enforce a British peace among the lawless fisherman of many nations who were living along the hundreds of miles of coastline.

By 1610 the British referred to Easton as a “Notorious Pirate”. He had become the most powerful pirate in the Western Hemisphere. He was very wealthy and had thousands of men in his crew. He had a fleet of forty ships which were stationed near Bristol at the mouth of the river Avon. From this site he was able to hold up all the traffic in the English Channel.


In 1610, Easton turned to piracy to survive and eventually established a home base in Harbour Grace, Newfoundland. Easton built a crew of pirates and acquired a fleet of ships that enabled him to control the waters off the Eastern Seaboard.

In 1612, Easton moved his home base to Ferryland, Newfoundland. He plundered ships and recruited new pirates that served to enhance his empire. Easton and his crew were very fierce. Easton's greatest conquest was the capture of three Spanish ships that held such an amount of treasures for him and his crew, that he had amassed a fortune that would last a lifetime.

Easton was the leading corsair of his day and one of the most famous in the whole annals of piracy. He possessed all the requisite skills for his infamous trade but he was neither a blood-thirsty monster nor a swashbuckling cut-throat. On the contrary, he proved himself an outstanding navigator, an able, brave, and bold seaman, an expert tactician, and highly competent in gun-laying.