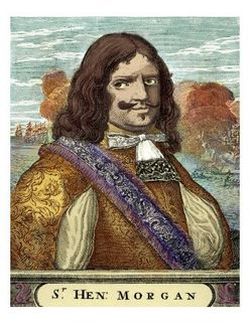 Sir Henry Morgan was a talented Welsh privateer and a Pirate Lord of the Brethren Court who fought for the English against the Spanish in the Caribbean. His three most famous exploits were the 1668 sack of Portobello, the 1669 raid on Maracaibo and the 1671 attack on Panama.

Henry Morgan was born in a prosperous farming family, but he chose a life at sea when he was young. He settled in Port Royal in Jamaica around 1660 and married his uncle's eldest daughter, Mary Elizabeth. He was employed by the English to attack Spanish settlements and sailed in the fleet of Admiral Christopher Myngs in 1662-1663.

In late 1667, Morgan was elected as admiral and his fleet was sponsored with by the Jamaican Governor Thomas Modyford to capture some Spanish prisoners and confirm rumors of an attack on Jamaica. After capturing some prisoners, he and his captains decided to continue their sail and attack the rich town of Portobello with his force of 500 men and ten ships. In July of 1668, Morgan attacked Portobello and overran its weak defenses. They loot the town held it for ransom, demanding and receiving 100,000 pesos in exchange for not burning the city to the ground. He left Portobello after about a month, gaining huge amount of wealth and fame.

"I am not just the Shadow Lord. Nor am I the useless pirate Henry that you found so very amusing. In fact, I am much older than you know, because I devised a way to live forever. I have been around for over a hundred years. I was a Pirate Lord myself. The truth is...I am Captain Henry Morgan of the second Brethren Court!" - Henry Morgan

In October 1668, Morgan decided to head to the Spanish Main once again. He organized another expedition and hundreds of corsairs and buccaneers rallied to his side. On March 9, 1669 he and his men attacked the La Barra fort, the main defense of Lake Maracaibo, and overtook it easily. They entered the lake and sacked the towns of Maracaibo and Gibraltar, but stayed too long. They were trapped in the city when Spanish warships blocked off of the narrow entrance to the lake. Morgan cleverly sent a fireship against the three Spanish ships. Of the three ships, one was sunk, one captured and one abandoned. He then tricked the commanders of the fort which had been re-armed by the Spanish, to turn their guns inland when he sailed past them at night.

In 1671, Morgan again gathered an army of pirates and headed to the rich city of Panama. He captured the San Lorenzo fort and marched overland to Panama City. The Spanish defenders were afraid of Morgan and abandoned their defenses. Morgan and his men looted the city and were gone before any help could arrive. Although it was a successful raid, it was the least profitable of his three major ventures as much of Panama's loot was already shipped away before Morgan’s arrival.

Morgan’s raid on Panama happened after Spain and England had signed a peace treaty and Spain was furious about the attack. Morgan was sent to England but was never punished. Instead, he was knighted by King Charles II of England and sent back to Jamaica as Lieutenant Governor before retiring to Jamaica. Captain Morgan is considered one of the greatest pirates ever, even though he was actually a privateer. He spread terror on the Spanish Main which helped in the treaty negotiation between England and Spain. Certain places are still named for him, such as Morgan's Valley in Jamaica and Morgan's Cave on San Andres Island.