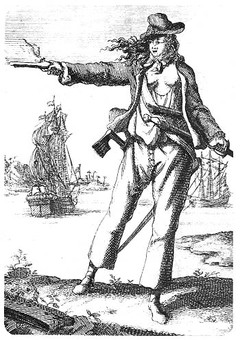 Anne Bonny was born in County Cork, Ireland. She was the illegitimate daughter of lawyer William Cormac and his housemaid, Marry Brennan. They moved to America after Anne's birth in the late 1600s to start a new life as a family on a plantation near Charleston, South Carolina. Anne lost her mother in her late teens and she had to take care of her father's household. She was known as an attractive but fierce young woman. When she was sixteen, she fell in love with a small-time pirate, James Bonny, who was interested in her father's estate, and eloped with him against her father's will.

James took her to a pirates' lair in New Providence in the Bahamas when Anne was disowned by her father. There, she met the swaggering pirate Captain Jack Rackham. They fell deeply in love and Jack Rackham even offered to buy her from Anne's husband. Anne left her husband and disguised herself as a male to join his crew, sailing with him on his sloop "Vanity" while preying on Spanish treasure ships off Cuba and Hispaniola.

“The crew of "Revenge" was taken to Port Royal to stand trial. The trial was a big sensation, because the background of the female prisoners was reviled. Anne and Mary were women who escaped from traditional restrictions and in their own way, fought for equality between men and women.”  - Krewe of Bonney Read, The Legend of Anne & Mary

Anne was one of the most famous women pirates in history, the other being her crewmate Mary Read. They gained reputation as "fierce hell cats" and were respected by their fellow crew members due to their violent tempers and ferocious fighting. When Anne was found pregnant, Rackham left her on Cuba to deliver the baby. Anne soon rejoined Rackam on the high seas as soon as her baby was born and left her baby with some friends in Cuba.

In October 1720, the commander of British Navy, Captain Barnet, led the attack on Rackam's ship "Revenge" when it was anchored off Point Negril, Jamaica. The fight was short as Rackam's crew were drunk after celebrating all night. Only Anne and Mary resisted but they were also overpowered. The entire crew was captured and taken to Jamaica to stand trial on November 16, 1720. Before Rackam’s execution, Anne was allowed to visit her her lover and her last words to him had lived throughout history: "Had you fought like a man, you need not have been hang'd like a dog."

Anne and Mary were found guilty for the crime of piracy and they were sentenced to death by hanging. But at their sentencing, both of them were spared when they were found to be pregnant, since British law forbade killing an unborn child. Mary died of a violent fever in the Spanish Town prison in 1721, before the birth of her child, but the fate of Anne Bonny is unknown. No record of Anne's execution has ever been found. According to the Oxford Dictionary of National Biography (2004), Anne Bonny’s father managed to pay the ransom for his daughter and bring her back to the Charles Town. Soon after, she gave a birth to Rackham’s child. In 1721 she remarried to Joseph Burleigh. They had eight children. She died in April 25, 1782 in South Carolina.